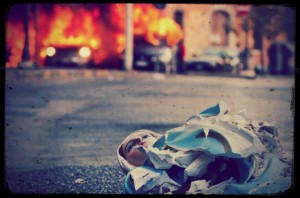 One of my favourite classes at school was history and though I regret not having embraced more of that opportunity to learn about our forefathers, nationally and internationally, I still retained many pieces of information that come back now and then, as a thought over a cup of coffee or some book I periodically look up from. One particular idea emerged recently from my reflections upon the recent same sex marriage referendum and my thinking on what has become the modern Irish political climate. I remember being told by my teachers and others that if only the Irish had stuck together in history, then the English would never have been able to disturb us as they did. If only we Irish had combined our efforts and mutually worked toward an ideal then we could today have been free from all the struggles we endured together at the hands of unwanted rulers.

In my teenage years I noted the continued political party divisions north and south of the border as people aligned themselves with one party or the other and, absolutely and stubbornly, refused to compromise allegiances. The greatest example of this concept is the divide of Sinn Fein and the SDLP (Social Democratic and Labour Party) in the north. I reflected often on why these two “Catholic” parties could not just join together and form a united effort, making them the largest party in the north and therefore giving them political authority. It made sense to my young mind that these grown-ups could briefly set aside their differences for a common goal and the good of their people. To me, this stubborn refusal was a continued manifestation of Irish division, which has kept us enslaved to foreign influence for most of our history.

Today however, the climate is different. Another division exists but Sinn Fein and the SDLP happen to be more united than they have ever been. Their ideas are so similar now that it is often hard to distinguish between them. Despite this, they continue to maintain that they are different and they continue to present to the people of the north a fantasy that when voting for one party or the other they are freely choosing something different. But there is no choice. This unification is so clear it is amazing that more people are not aware of it. Both Sinn Fein and the SDLP are socialist, both advocate greater involvement of government in regulating the lives of the people rather than allowing the people to grow their own lives as they see fit with encouraged community liberty. Any difference in policy is merely a façade making it appear like the parties are still at odds. This tactic enables them to procure the same voters year after year, allowing their politicians to remain in power and to continue collecting massive paychecks on the dime of the unsuspecting people they represent. This deliberate power manipulation ensures that little changes and garantees the people continue to rely on government to run almost every aspect of our lives like care of our sick, education of our children and regulation of our businesses. From the fuel we put in our cars to the beer we order at our bars, our voted leaders have their way and we supply their pay.

As for a United Ireland, it is further from us now than ever before. A significant, growing collection of people are becoming more and more marginalized and disenfranchised at no longer having representation. History repeats, for those people are once again, Catholics. Sinn Fein and the SDLP can no longer be known as Catholic parties. In fact, by their policy, they have transformed into parties more anti Catholic than even the Democratic Unionist Party (DUP), who have traditionally been known as the most virulently anti Catholic party in Ireland. But therein lies the deception. The DUP are not anti Catholic per se. Rather, they are merely anti nationalist or anti republican. The war in Ireland’s north has never been a religious war. Never, in Irelands history, has a Catholic killed a Protestant because they believe in sola scriptura and never has a Protestant killed a Catholic because they believe in Transubstantiation. Historically, our war has been geographical and cultural. Today however my friends, as we stand on the brink of persecution, a barrage of anti Catholic, anti liberty and anti human political policies, lawsuits and referendums are being forced upon our heads. Our war has finally become religious! Sinn Fein and the SDLP are now more virulently anti Catholic than even the Democratic Unionist Party.

Sinn Fein and the SDLP no longer represent Catholicism, and Catholics can no longer vote for them because to do so would be to choose compromising the laws of humanity, originating in God. The politicians of these parties may still claim the title “Catholic,” but this is deceptive. By claiming that title, their goal is to hold on to the Catholic vote. They want to convince Catholics that we can choose to believe whatever we want, to form a personal belief system by interpreting the bible as we wish or as we feel; to pick and choose the teachings we like and to reject the teachings that make us uncomfortable. Be aware! That ideology is reformation. That ideology is protestant! Sinn Fein and the SDLP are now protestant parties.

Sinn Fein embraces abortion (the direct killing of unborn children). SDLP support IVF (which leads to abortion). Both parties support same-sex unions being called marriage. Each party has no discomfort continually attack and ridiculing Irish Catholic priests and bishops and neither accept the idea that Truth is enshrined and unchangeable. They create confusion among Catholics by choosing anti Catholic principles and then inferring that it is okay for Catholics to choose those principles. This creates a deliberate oppositional disposition against the Irish Catholic Church. Uncertainty reigns. Who do Catholics choose? Should they follow the party leaders they have looked up to as idols for decades or stay loyal to their bishops and priests championing the teachings of an age-old faith. Sadly, media marketing has engineered the minds of most Irish people to turn away from Christ and to choose human masters once again.

It must be the most phenomenal ideological transformation in world history. Sinn Fein and the SDLP are no longer Catholic. They are now protestant. The policies of the DUP are more representative of Catholicism. How did this happen? What do we do? To whom do Irish Catholics turn to now in this cataclysmic climate?

“It can’t be the DUP,” you cry! Anything but that!

Fear not! The DUP has an evangelical school of thought still far from the Catholic ideal. It is true they are the best party to represent Catholicism and they may be our only choice currently but the real answer for us is leadership and it is leadership that must emerge now. We need strong, truly Catholic men and women to stand up and form an effort that will absolutely represent our Catholic voice, which is being marginalized and persecuted once again. This may mean the formation of a new party or it may mean the involvement in public discourse of passionate individuals willing to fight no matter what the consequence, personal or professional. We need heroes, saints, and warriors. We need strong, charismatic and determined men and women who our young people can be proud to look to, to follow, to emulate. We need people to champion objective Truth, who will never compromise that Truth, who will never compromise our Catholic ideal. We need you now. Whoever you are, I beg you, stand up! For the love of God, be brave and pray, pray, pray!

May Ireland Rest in Peace

The Tolling Bells of Coffin Ships Allure our Young Away